Things You Should Know About Madrid 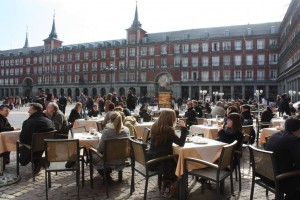 Most visitors travel to Spain with the impression that Madrid is simply a bustling capital and an entry point for them to explore the surrounding region. Many are more drawn to the southern part of the country or the northern coastline for their reputed rich cultural displays. But Madrid, despite being a major metropolis, is more than just a modern business center – it has a myriad of history, culture and activities on offer, so for the uninitiated, here are some things that you probably should know about Madrid before planning your trip.

It’s not that expensive.

You might hear many Spaniards complaining about the soaring prices in Madrid, but if you compare the cost of living here to that of other Western European cities like Paris or London, Madrid is relatively inexpensive to travel. A simple tapas dinner costs around 3 to 5euros, while a standard meal at a restaurant can set you back at 10 to 12euros. A Madrid hostel dorm room costs around 20 or 25euros per person, and a three-star hotel at 60 to 80euros per room. In contrast, its neighboring capitals are usually much pricier when it comes to food and accommodation. However, we can’t deny the fact that Madrid is definitely costlier than other Spanish cities. Cities in the Andalusia and Extremadura region are relatively cheaper although prices go up in summer.

It’s easy to get around.

If you’ve got the impression that Madrid’s sheer size makes it complex to navigate, you’re not the only one. But once you’re riding Madrid’s metro system, you’ll find it rather easy to find your way around and getting to and from your hostel is just a walk in the clouds. Buying a metro ticket or tourist pass is also straightforward, with standard metro tickets (regardless of your destination) costing 1euro each. Exploring the city by foot is also simple and manageable. Road signs are everywhere and people on the streets are always willing to help.

It is more than just a commercial hub.

Despite the massive urban skyline that sprawls across most of Madrid, there’s more than meets the eye in this historically-enchanting city. In the heart of its historic quarters, every street corner has a story to tell and a monument to admire. Forget the hectic morning crowds. Take a relaxing stroll during off-peak hours and you’ll find yourself surrounded by green patches, quaint alleyways and friendly old folks. There are always two sides to a coin, and you’ll only get to see the real Madrid when you catch a glimpse of both aspects.

It’s not only a city, but a region.

Although most of us know Madrid as the capital city of Spain, Madrid is also the name for the entire region, or community in Spanish. La Comunidad de Madrid covers a massive area, including the capital Madrid, its surrounding suburbs and nearby towns and villages.  Many UNESCO towns like El Escorial belong to the Madrid Community. These attractions are often seen on daytrips out of Madrid and are easily accessible from the capital.

Many travelers make the common mistake of expecting other people to speak English, especially so in a country’s capital.  Most Spaniards learn English at a young age in school, but unfortunately many of them are too shy to use the language. Try to pick up a few words in Spanish, especially basic words like ‘hola’ (hello), ‘gracias’ (thank you) and ‘La cuenta, por favor!’ (The bill please). They usually appreciate your effort and tend to lose their guard when speaking to you. A little effort will bring you a long way into the hearts of the locals.