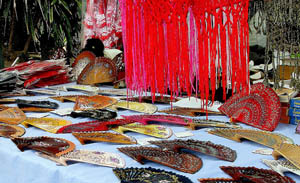 Street markets in Seville are the perfect place to buy several freshest produce and food in the city that is normally very well priced. The street markets provide a great chance to try local delicacies as well as specialties in the city of Seville which includes cheeses, cured hams and sausages.
Majority of the street markets within and near Seville offer a bit of everything, though Seville does also have some specialist markets.

Mercadillo de los Jueves is considered as the most colorful street markets in Seville. This is an open air street market that started many years ago. It has stalls that include used books, postcards photographs, paintings, overall knick-knacks and other collectible stuffs. This street market is appealing for those individuals who love people-watching since the place is also intended for people who have an eye for great deals. Mercadillo de los Jueves is located in the heart of Seville, in Feria, Alameda Hercules. It is accessible to the public every Thursday, from 7 in the morning until 3 in the afternoon.

Located in the Plaza de la Alfalfa, Mercadillo de la Alfalfa is an impressive street market, offering a wide array of animals. The animals being sold in this street markets are cats, birds, dogs and a lot more. Also, there are pet foods, accessories and cages for sale . The street market is open every Sunday from 7 in the morning until 3 in the afternoon.

This huge, al fresco street market in Seville is packed with a broad array of fascinating objects such as flowers, fruits, vegetables, clothing, Spanish dolls and some antiques as well. Located in Plaza de la Alameda, Mercadillo de la Alameda is a famous street market n Seville each morning and sits in the eminent city center. The street market is open each Sunday of the week, from 7:30am to 3:00pm.

This street markets is where you can find fashion accessories, perfumes, sunglasses, jewelry and broad range of other items. During Christmas, this street market gets bigger and becomes an ideal location to look for gift ideas. Also, there are a lot of fascinating shops close to the market. This street market is situated in the Arenal regions of Seville. It is open from Thursday to Sunday at 10am to 9pm.

This outdoor street market is a busy location during Sunday mornings as many collectors gather in search for good deals. With stamps, antique coins postcards and other collectible objects for sale. This thrilling street market is held in the historic city of Seville. Mercadillo Filatélico is open every Sunday, from 8am to 3pm.