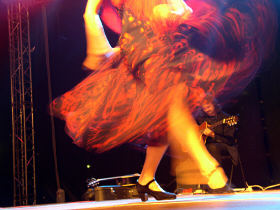 While summers in Spain can be unbearably hot, and even the air September can still feel like it’s hanging onto the heat of August, October in Spain is perhaps one of the most pleasant months to visit the country, weather-wise, although as you might expect the later you get in the month the cooler it will be.

The country-wide average temperatures for October (which is kind of a silly number to come up with, really, as the country’s climate varies so widely from one region to another, but I’m just quoting the official Spain tourism website here) are just over 70F (25C) for a high and just over 52F (11C) for a low. Because some of Spain’s most popular cities are absolutely stifling in the height of summer, they’re really best avoided until the shoulder seasons – October is probably the best month to visit cities like Madrid, for instance.

But even though some parts of Spain can get cooler in late October, in some places it’s still totally possible to include lying on the beach in your vacation plans! You’ll need to check with current weather forecasts, but especially if you’re going to the Costa del Sol, you might want to consider bringing your bathing suit with you.

Some average temperatures for Spain in October, listed by city, are:

The rainfall levels in Spain in October vary by region and city, but the country-wide average is just over 68mm for October. Barcelona, Valencia and Madrid average about 10 rainy days in October, while Seville, Granada and Malaga average only 8. Cities like Santiago and Bilbao average more rainy days, coming in at 18 and 15 respectively.

As for the festivals in October in Spain, the biggest country-wide holiday all month is Spain’s national holiday on October 12, the Dia de la Hispanidad – also known as Columbus Day. This means that lots of things will be closed, including banks and some tourist attractions. If October 12 falls on a Tuesday or a Thursday, some shops may also be closed the Monday before or Friday afterwards as well – check with your hotel or hostel to find out more. Some other holidays and festivals which take place around Spain in October are:

And just in case you happen to be in the Alpujarras mountains in early October, be sure to swing into the town of Cadiar where they mark their Feria de Octubre by replacing all the water in the city’s fountains with wine.