Save on a Spring Fling in Spain 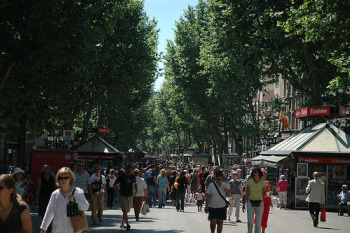 The busiest times of year in Spain often correspond to the best weather and the highest prices. Winter brings lower prices and fewer crowds, but you may end up suffering through a few days of unpleasant weather.
In the north, near Barcelona, this could mean cold, damp and foggy days, while closer to the center of the country, near Madrid, you may even see some snow and ice. Shoulder season – spring and fall – combines the best of both high and low season: pleasant weather, fewer crowds, and lower prices.
If you’re thinking about a spring trip to Spain, check out our cheap flights to Spain. I’ve seen prices for March as low as $650 for flights from New York or Chicago to Barcelona, and as low as $700 from these cities to Madrid. Easter travel deals for April are also available. Flights from Chicago or New York start at $750 to Madrid and at $680 to Barcelona.
Most hotels and hostels offer lower rates during shoulder season as well. During this time, it’s easy to find cheap hotels in Barcelona and Madrid, as well as in smaller towns around the country. Hotels and hostels in major cities tend to be more expensive, but you can generally find a nice, clean, comfortable hotel for under 60-70 euros and a hostel for around 10-15 euros in March and April.
Stroll through Madrid’s Plaza Mayor without feeling like you might die of heat-stroke and ramble down La Rambla in Barcelona without the overwhelming crowds of people that pack the street in summer months. Enjoy warm days, cool nights, and low prices before the summer high seasons hits and you’ll save money and have a better experience.
Photo by biketrouble