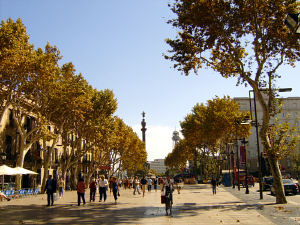 Most cities have one main street around which not only tourists gather but regular real-life stuff happens everyday. In Barcelona, that street is called La Rambla. It’s just over a kilometer long, but it’s a grand avenue in the best sense of the term and is the central point from which all visits to Barcelona are based.

La Rambla, sometimes called Las Ramblas, runs from the Placa Catalunya to Port Vell and it’s a pedestrian-only area. It’s lined by shops and cafes, and many of the vendors have spilled out onto the street itself, so you’ll find shops and market stalls dotting the avenue. You’ll either have to dodge them to keep walking, or stop and see what’s for sale. And really, you’re on vacation – it’s no contest, right? Of course it’s not. You’ll stop. You’ll want to stop.

In addition to the shops and restaurants that have store-fronts right on La Rambla, you’ll also find tons of great shops and cafes nearby on side streets. There are also lots of hostels and hotels in Barcelona in this area, and while it’s not the quietest area (so not necessarily advisable if you’re a light sleeper or plan on going to bed early!), it’ll satisfy anyone who’s looking to be right in the heart of the action in Barcelona.

This beautiful and bustling tree-lined avenue is generally busy in just about any season, full of people. And while this area is frequented by locals as well as tourists, during the high season especially you’ll probably see mostly tourists strolling on La Rambla. Because of this, it’s a popular spot for pickpockets to ply their trade – so watch your wallet while you’re browsing the shops and enjoying the view.

La Rambla is in what’s called the Barri Gotic, or the Gothic quarter of Barcelona, although the Place Catalunya at one end marks the separating point between the Barri Gotic and the Ciutat Vella, or Old City. Either neighborhood is a great place to base yourself if you’re visiting Barcelona, because so much of what you’ll want to see is within walking distance. But if you’re not close enough to La Rambla to walk there, Barcelona’s Metro makes it easy to reach – there are three Metro stops that will put you at various points along the boulevard: Catalunya, Liceu, and Drassanes.