Ferries from Almeria to Melilla (and return) 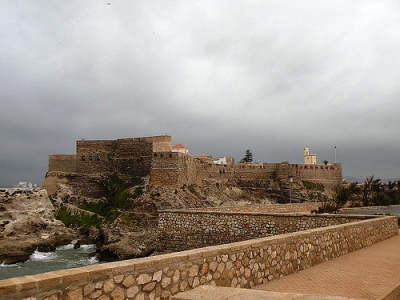 The Melilla to Almeria ferry schedule is available at the bottom of the post.
Almeria is located in southeastern Spain, on the Mediterranean coast. It might not be on everyone’s list when planning the vacation in Spain, but it’s a good choice if you want to get from Spain to Morocco and avoid the very popular (and always crowded) routes.
Melilla is Spanish territory in North Africa and hence Spanish is spoken here and Euro is the currency used. The town is charming and you can spend a day checking out the fortified old town and the city’s stunning architecture. It’s also a great place to shop as Melilla (like Ceuta) is a territorio franco so no taxes are being paid (not even VAT). The best part though is that you can literally walk to Morocco. The border is at only 2 km from the city’s main square.
One great advantage of the ferry route between Almeria and Melilla is that ferries work in September and October* , while on other routes the ferries stop working by mid-September.

How long does it take to get from Almeria to Melilla?

The regular ferry takes 7 hours to get from Almeria to Melilla, while the high speed ferry takes only 4 hours.

Is there a high speed ferry between Almeria and Melilla?

How much does it cost to get from Almeria to Melilla by ferry?

How many ferries per day depart from Almeria to Melilla ?

The following ferries are available between Almeria and Melilla: until June 26 there are regular ferries on Mon, at 4:30 p.m. and on Tue, Wed, Thu, Fri, Sat, Sun at 11:59 p.m., while between June 27 and June 30, there’s also a high speed ferry on Mon, Tue, Sat, Sun at 12:00 p.m.. Between July 1 and July 3 only the regular 11:59 p.m. ferry is available, while starting with July 4 the high speed ferry is also available until July 7, including. And so on.
In short, on Wed, Thu and Fri, there is , generally, only one regular ferry available, while on Sat, Sun, Mon and Tue there’s the regular ferry and a high speed ferry. Starting with September 4, there are only regular ferries on the weekend, as well.

Are there any overnight journeys between Almeria and Melilla ?

How about the ferries from Melilla to Almeria ?

The following ferries are available from Melilla to Almeria: regular ferry on Mon at 9 a.m. and on Tue to Sun, at 12:00 p.m. until June 26. Starting with June 27 , there’s also a high speed ferry at 6 a.m., from Sat until Tue including.
After July 1, the schedule is, generally, on Wed, Thu & Fri, a regular ferry at 12:00 p.m. and on Sat, Sun, Mon and Tue also a high speed ferry at 6 a.m. Starting with Sept 1, there are only regular ferries over the weekend as well.

Where can I buy tickets from?

Tickets can be bought from the ferry company’s (Acciona Transmediterranea) website, from online booking sites and from the ports.
Search here for ferries: