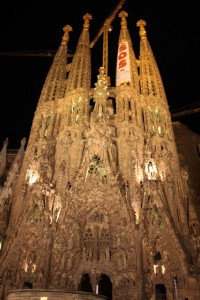 Spain’s second biggest city is a world of extreme – avant garde styles mixed with age-old traditions. A sizzling melting pot of flavors and culture, Barcelona’s Boqueria market is a feast for the eyes while its vibrant modern art scene seduces young, hip travelers with fascinating colors. Barcelona is also a paradise for lovers of architecture: from modern, futuristic edifices to charming historical cathedrals, each building has a story to tell. If you’d like to squeeze in as many as sights as possible during your short stay, here are some ideas to help you set you an itinerary.

La Rambla Walking Street
Barcelona’s main pedestrianised street, La Rambla, is an excellent spot to people-watch and soak in the city’s vibes and artistic flair. Many Barcelona hostels and hotels are located in the alleys perpendicular to this street. Along the thoroughfare, you’ll find plenty of caricature street artists, miming performers and flower vendors. On a Sunday, it’s bustling with energy as locals and visitors stroll languidly along the street to get to Port Vell (on one end) and Plaza Catalunya (on the other). 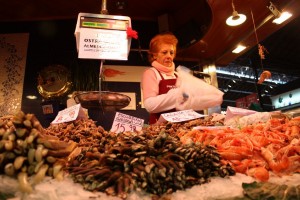 La Boqueria Market
One of the most interesting places to visit, La Boqueria is bursting with colors, energy and culinary flavors. As one of the biggest food markets in Spain, La Boqueria is stocked full of rainbow-colored fruits, wriggling seafood and rows upon dizzying rows of jamon butchers. This is definitely the best market to get a feel of local life and to buy produce to cook in your hostel. Located along La Rambla street, you won’t miss it.
Plaza Catalunya
The city’s biggest square is also home to the commercial and shopping district. You’ll find the tourist information office here as well as various major meeting points, metro stations and bus stops. It’s a good place to orientate yourself upon arrival. If you’re looking for some particular products or souvenirs, this would be also an ideal place to go to.
Port Vell
Head on to the other end of La Rambla street and you’ll be entering a whole different world: one of futuristic, avant garde beachfront living. Glass-walled angular edifices are scattered along the stylish port area, littered with upscale restaurants and bars. Walk further down the port and you’ll get to a mall with arcades, boutiques and a food court to wile your time away. 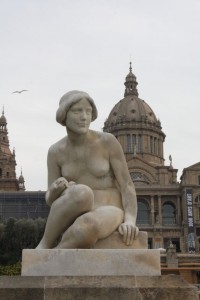 Barri Gotic
Barcelona’s old quarters, known as the Barri Gotic, is rather similar to the historic quarters of most Spanish cities. Wander through its labyrinth-like streets and you’ll come across plenty of gothic style edifices. It makes for an excellent day of exploration and you’re sure to stumble upon interesting tales and stories from the past.
Sagrada Familia
The iconic Sagrada Familia Cathedral of Barcelona is definitely worth visiting even though construction hasn’t been completed. It has taken close to 50 years to build, and it seems there will be another century more before the entire cathedral will be unveiled. The psychedelic tree-shaped roofs of the cathedral poke out into the city’s skyline, portraying quite an alternative image for a religious landmark. Entrance fee is 10euros, but you can easily spend a whole afternoon reading about the background of the cathedral and the unique architectural design involved in it.
Montjuic and Modern Arts Museum
Poised above the city is the district of Montjuic, a hilltop neighborhood packed with delectable works of art, museums and stadiums. First, start out by visiting the Modern Arts Museum, with a notable collection of contemporary art pieces on display. It is quite a climb to get up there, but take your time and don’t forget to look back at the panoramic view of Barcelona’s city center. Another place of interest worth checking out is Miró Contemporary Art Museum – especially the attention-catching, brightly-colored monument he designed. The Barcelona F.C. football stadium is also located in this area, poke your head in to get a feel of the stadium or visit its museum to stock up on souvenirs.

Parc Güell
Another masterpiece by Barcelona’s most famous artist and architect, Gaudi, Parc Güell features multi-hued mosaic tiles, sprinkling fountains and patches of green gardens. The park is specially perched on higher ground to give a bird’s eye view of the city. On a cloudless day (which is rather frequent), you can see the city’s major landmarks clearly from here. The park is slightly way out of the major city attractions, but it’s definitely worth visiting even if you’re short of time.
La Pedrera
Gaudi’s creativity is flashed out on this quirky architectural marvel, with a swirling effect on its brown façade, imitating nature and tree formations. Although you can’t enter the private building, visitors can still climb to the rooftop to check out the view from above. The building is best admired from outside; it’s within walking distance from Plaza Catalunya.
Barceloneta Beach Boulevard
After a day of admiring art pieces, it’s time to relax and unwind of Barcelona’s sprawling city beach. In summer, the whole stretch of sandy beach is packed to the brim, with both locals and visitors fighting for some sun by the sea. Along the boulevard, you can also enjoy sumptuous Catalonian food at the stylish restaurants and diners. Sip a refreshing horchata on the beach or hide under the shade and cool down with a beer – there’s always something for everyone.